North Shields FC won the FA Vase Trophy at Wembley stadium, to celebrate this achievement North Tyneside council allowed the club to have an open top bus parade around the town on 22/05/2015.
North Shields were formed as North Shields Athletic in 1896, they initially played at Appleby Park which was one of the best football grounds in the the North East with a capacity at one point of over 12,000. One of their greatest moments was winning the FA Amateur Cup in 1969.
North Shields are the only team to have won the FA Vase and the FA Amateur Cup.
The official club motto is "Messis ab Altis" or "Harvest from the Deep", a reflection of the history of coal mining and fishing in the town.
In recent years the club have been saved from a difficult period where they lost Appleby Park and had to move around various grounds in North Tyneside before moving to the Darren Persson stadium @Ralph Gardner  Park, North Shields which the club are currently modernising.
Please click on each image for the full size photo. 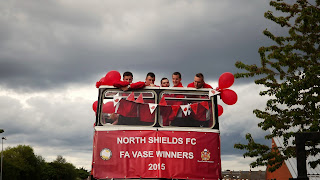 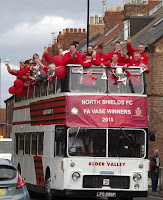 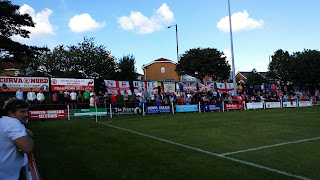 Posted by https://northumbrianimages.blogspot.com/ at Saturday, May 23, 2015