On the 12th of September 2016 the statue of Newcastle United's greatest ever goal scorer Alan Shearer was unveiled next to St James' Park.
Shearer scored 206 goals in his Newcastle career. Alan Shearer is also the record all time Premier League goalscorer and former captain of the England team.
Also in the pictures are Freddie Shepherd, former chairman of Newcastle United F.C. and owner of Shepherd Offshore who paid for the statue, Kevin Keegan who managed the club and was a player previously and former Newcastle and Scotland captain Bob Moncur.
Please click on each image for the full size photo. 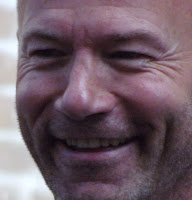 Posted by https://northumbrianimages.blogspot.com/ at Monday, September 12, 2016 No comments: Links to this post