Bessie Surtees House is the name given to two five story Jacobean houses built in the 16th and 17th centuries. Originally the two houses were known as Surtees House and Milbank House.
Bessie Surtees eloped with John Scott a coal merchant's son who went on to become Lord Eldon, Lord Chancellor of England.
A cast iron plaque is situated below the window from which Bessie eloped.
The property is now owned by Historic England and is their office covering the North East & is a grade 1 listed building.
Please click on each image for the full size photo. 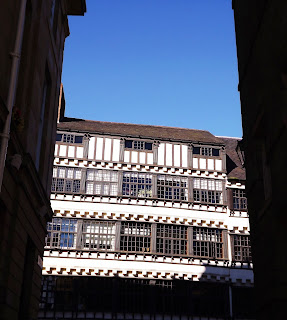 Posted by https://northumbrianimages.blogspot.com/ at Thursday, September 29, 2016 No comments: