The Newcastle Keep is the remaining structure from a medieval castle fortification. This is the new castle from which the city derives it's name.
The site was used defensively in Roman times when a fort was built to protect the Pons Aelius bridge over the Tyne, where the Tyne Swing Bridge is positioned now. A wooden Norman fort was built on the same position in 1080 by Robert Curthose, son of William the Conqeuror.
The existing  Castle Keep was built between 1172 and 1177 by King Henry the Second.
In 1643 the Royalist Mayor of Newcastle Sir John Marley strengthened the castle walls and in 1644 the invading Scottish army, in support of the Parliamentarians during the English Civil War, laid siege to the castle and occupied the city for 3 months. The defenders were starved  into surrender on the 19th of October 1644.
Between the 16th and 18th centuries the castle was used as a prison.
The Victorians built a railway viaduct between the Keep and Black Gate which joins Newcastle to Scotland. The Keep is a grade 1 listed building and scheduled ancient monument.
Northumberland has a high density of remarkable castles, photos of many of these castles can be seen here.
Please click on each image for the full size photo. 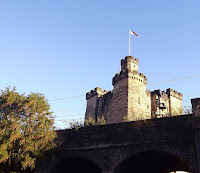 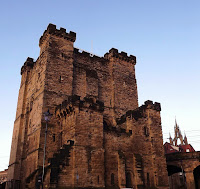 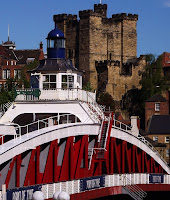 Posted by https://northumbrianimages.blogspot.com/ at Saturday, December 27, 2014 No comments: Links to this post