The Challenger Tank is the main battle tank of the British Army.
These tanks were built in Newcastle and saw service in the Gulf War of 1990/91 and again in the Iraq War of 2003.The armour of the tank is the best in the world and saved many lives during times of conflict, Challenger tanks will be modified to remain in front line use for years to come. The prototype challenger tank is situated outside the Discovery museum.
The tanks represents a link to an important period part of Tyneside industrial history, the Armstrong works in the Scotswood part of the city employed thousands of people for many years & has been a centre of engineering for over 160 years.
The factory produced cars, locomotives,aircraft parts as well as the hydraulics for both the Swing bridge over the Tyne and Londons' Tower Bridge.
The factory manufactured the first self breaching guns for use during the Crimea War and was central to making tanks and huge number of other armoured vehicles for use by the British and allied forces in World War One and World War Two.
In addition the factory produced parts for Spitfires and the bouncing bombs of Dambusters fame.  The Armstrong works was an important component in ultimate victory in both of those conflicts.
The factory is now owned by Reece Group and is their centre for engineering and innovation, work on behalf of the British Army is still done there.
William Armstrong made a huge impression on the North East.
Armstrong created Jesmond Dene park in the city pictures of that can be seen here.
Armstrong's Cragside Mansion was the first in world to be powered by hydro-electric power see photos here.
Armstrong also built the Swing Bridge over the Tyne, photos here.
Photos of the city centre monument dedicated to Armstrong can be seen here.
Please click on each image for the full size photo. 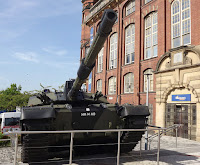 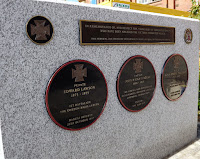 Posted by https://northumbrianimages.blogspot.com/ at Friday, September 23, 2016 No comments: Links to this post