Etal Castle, situated in the village of the same name, was built in 1341 by Robert Manners. It was the centre of local feuding including a battle between the rival Manners and Heron families in 1428. After an invasion by the Scottish army in 1513 the castle was occupied by King James IV of Scotland.
The castle came under the ownership of the crown in 1547 and was used as a garrison until 1603. The castle was abandoned in 18th century and became a ruin from then.
Please click on each image for the full size photo. 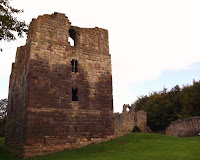 Posted by https://northumbrianimages.blogspot.com/ at Thursday, October 16, 2014 No comments: