Some shots of the FA Vase Final played at Wembley Stadium on 09/05/2015.
North Shields beat Glossop North End 2-1 after extra time to win the trophy, North Shields play in the Northern League whose teams are drawn from Norhumberland , Tyne and Wear, Co Durham, Teesside and Cumbria and is the second oldest football league in the world.
The club had victory parade around North Shields on the 22/05/2015.
More photos of Northern League club grounds can be seen here.
Please click on each image for the full size photo. 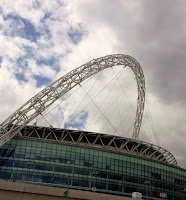 Posted by https://northumbrianimages.blogspot.com/ at Monday, May 11, 2015 No comments: Links to this post