“As for the curve of Grey Street, I shall never forget seeing it to perfection, traffic-less on a misty Sunday morning. Not even Regent Street, even old Regent Street London, can compare with that descending subtle curve.”
Poet Sir John Betjeman.
In  2002 Grey street was  voted 'Best street in the UK' by BBC Radio 4 listeners.
Grey Street was built by John Dobson and Richard Grainger in the 1830s and is famous for it’s classical Georgian architecture.
The street follows the route of the Lorke Burn, which flows into the Tyne but is now underground, and curves slowly eastwards towards the river .
Grey's Monument was constructed in 1838 at the top of Grey street in honour of Earl Grey in 1838 to commemorate the Reform Act of 1832, drafted during Earl Grey's time as Prime Minister.
To see photos of Grey’s monument please click here. 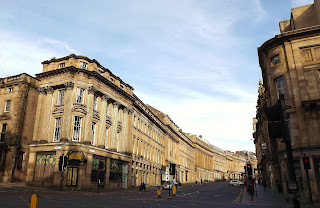 Posted by https://northumbrianimages.blogspot.com/ at Saturday, January 16, 2016 No comments: Links to this post