HMS Duncan on the Tyne


HMS Duncan on the Tyne.

HMS Duncan (D37) is a Type 45 or "Daring" class Royal Navy air defence destroyer. She is one of the most modern warships in the world.
The ship is armed with the powerful Sea Viper air defence missile system which is controlled by the sophisticated Sampson radar and advanced computers.The missile has a range of 75 miles(120
km)
The vessel also operates a Wildcat helicopter which is equipped with anti-ship missiles and anti-submarine torpedoes.
Duncan is further protected with both computer & manually guided guns.
The ship has a regular complement of 191 which can be increased to 235, she weighs over 8,000 tonnes has a range of over 7,000 miles and a top speed of over 30 knots (35mph/56 kmh)     .
HMS Duncan visited the Northumbrian Quay, North Shields arriving on an overcast day on 06/02/2015 before leaving on 09/02/2015.
The ship is usually based at Portsmouth Naval Base.
The ship is named after Scottish born Admiral Duncan, famous for his heroism at the battle of Camperdown.
Please click on each image for the full size photo. 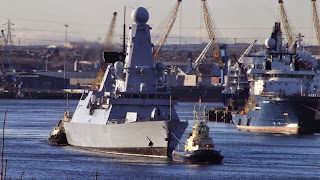 Posted by https://northumbrianimages.blogspot.com/ at Monday, February 09, 2015 No comments: Links to this post