The Holy Island of Lindisfarne has a written history dating back to the 6th century.
It has been an important place for pilgrims for many centuries, and still is today.
The island was a centre for Celtic Christianity and the Saints Aiden (originally from Ireland)
and Cuthbert, from Northumbria, lived here.
The famous Lindisfarne Gospels were created on the island.
A small castle was built on the island in 1550 and the castle was extensively rebuilt in the 19th century.
Bamburgh Castle is visible from Lindisfarne.
Please click on each image for the full size photo. 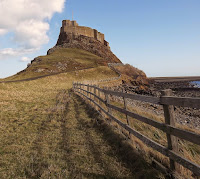 Posted by https://northumbrianimages.blogspot.com/ at Tuesday, March 10, 2015 No comments: Links to this post