Newcastle Central Station was opened in 1850 by Queen Victoria and is a grade one listed building.
The station is nationally important and serves the East Coast Main Line between London and Edinburgh as well as being connected  to Carlisle and Middlesbrough.
In addition there are trans pennine services to Manchester and Liverpool & trains from Newcastle go as far as Penzance.
Newcastle Central is also served by an underground station on the Tyne & Wear Metro system.
The station was built with 3 curved, arched spans which were the first of their kind and this design was copied by other stations.
Newcastle Central was designed by John Dobson in collaboration with the great Tyneside engineer Robert Stephenson, who was the son of George Stephenson the "Father of the Railways". Robert Stephenson also was responsible for the Newcastle High Level Bridge, which was the first combined road and rail bridge in the world. Photos of that structure can be seen here.
Please click on each image for the full size photo. 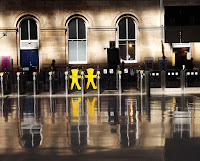 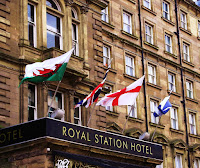 Posted by https://northumbrianimages.blogspot.com/ at Wednesday, January 27, 2016 No comments: Links to this post