Pictures of buildings which have relevance to the Second World War ( and in some cases they have histories which goes back much further than that).
Some of the buildings shown are hidden in plain sight and go unnoticed by most of us.
One of the biggest tragedies in WW2 happened in North Shields when a single German bomb killed 107 people in a bombing raid on a concrete air raid shelter under a lemonade bottling factory on May 3rd 1941.

WW2 Gun at Tynemouth Castle.
There were several guns based at the castle, the 6 inch gun which can be seen in the photo is a genuine 1944 weapon & can be seen in  position in one of the castle’s gun emplacements.
The castle was used throughout World War Two and previously World War One.  In 1943 the Home Guard, with many regular army gunners fighting overseas,  took over the operation of the guns. In 1956 most of the guns at the Castle were scrapped however many standing remains from the two world wars military involvement at the castle can still be seen and are in good condition.
Please click on each image for the full size photo.

North Shields Cliffords Fort.
The Fort was used for a short period in World War Two as an  emergency coastal battery, with two 12 pounder guns and searchlights based there. Also near to Clifford’s Fort there were soldiers barracks, air raid shelters and the area was surrounded with barbed wire, the two covered 12 pounder guns, faced out towards the mouth of the river, and were in place by late 1940 as protection against German naval attack, and a mortar position and and barrage  balloon were also installed.  On 10th April 1941 a German bomber dropped four high explosive bombs near to the fort the only time that Clifford’s Fort was attacked by the enemy.  By 1942 the garrison held 56 officers and men, but the battery was dismantled in May 1944.
Cliffords Fort has been restored with some of the original pre-World War Two features.

Cullercoats, Brown’s Point.
The station was used as a communications post in World War Two, after having been used for the same role in World War One. The two buildings were  damaged when a German parachute mine exploded after landing on rocks nearby. After the war, the station was used as part of the Coast Radio Station service until 1999. The site remains in good condition, and the basic structure of both  buildings has only slightly changed,  The site is now  being used for residential purposes. 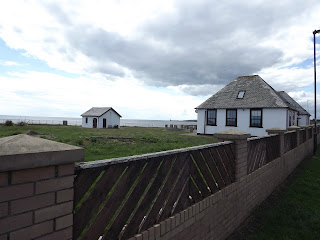 North Shields ferry landing
This armoured firing position would have had a good range of fire across the Tyne and is located next to the modern ferry landing, it would also been camouflaged to disguise it against the industrial background of the time. 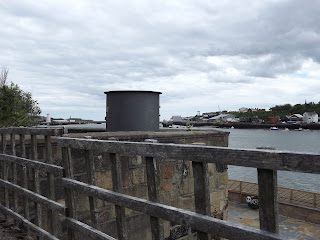 Tynemouth, 47A Percy Gardens, Command Post.
47A Percy Gardens Command Post is one of the more unusual structures connected to both world wars on the North East coast. In 1916 a six story tower was constructed, attached to the back of an existing house which was owned by the War Office (now the Ministry of Defence), and designed to act as a control centre for Tyne gun batteries.
The tower and house were retained until World War Two. In September 1938  it was clear that war with Germany was almost certain and the house and tower were occupied by military personnel in preparation of a German invasion across the North Sea.
It is now a  private residence. 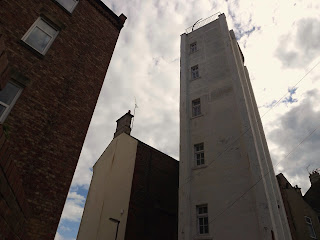 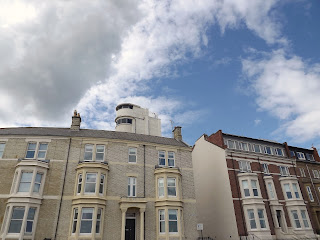 Further photos of Second World War buildings and structures in Newcastle can be seen here.
A little way along the coast is the Blyth Battery.
Photographs of the Newcastle Remembrance Day Parade.

Posted by https://northumbrianimages.blogspot.com/ at Thursday, June 23, 2016 No comments: