War memorial, Eldon Square.
There are several reminders of Newcastle's role and preparation for invasion in World War Two.
Some are highly visible and some go virtually unnoticed.
War memorial Eldon Square built in 1923 has become a centre of remembrance for the fallen of both world wars. On top of the monument is a sculpture of St George slaying the dragon, symbolic of the triumph of good over evil.
One of the biggest tragedies in WW2 happened in nearby North Shields when a single German bomb killed 107 people in an air raid on an raid shelter under a lemonade bottling factory on May 3rd 1941.
Further photos of Second World War buildings along the North East coast can be seen here. 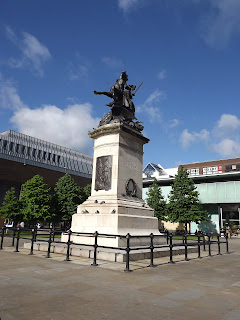 Military "loophole" at the Newcastle end of the High Level Bridge.
A loophole was a slit constructed into a building which was intended to provide cover for a machine gun which would pour fire onto attacking enemy troops, in this case across the High Level bridge from the south. 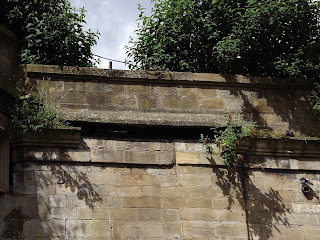 Bruce building pill box.
The Newcastle University Bruce building on Percy Street in Newcastle contains a pill box from WW2 at the rear of the building, during German bombing raids on the city, an air raid warden would stand in the pillbox and direct the efforts to combat the effects of the raids, in particular guiding fire crews to tackle incendiary bombs. 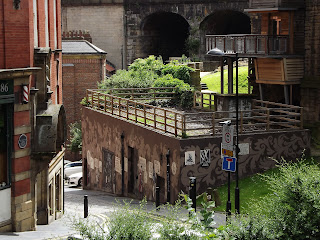 Photographs of the 2016 Newcastle Remembrance Day Parade.
Posted by https://northumbrianimages.blogspot.com/ at Thursday, June 30, 2016 No comments: Links to this post