Stan Laurel was born Arthur Stanley Jeffreson in Cumbria on 16/06/1890 but spent very little time there as his family moved to North Shields when he was very young.
He spent 10 years in North Shields in his formative years. His father was a theatre owner and later the family moved to Glasgow where Stan made his first professional performance, although Stan made several amateur performances in North Shields prior to that. His time in North Shields was very important to his life but very little is made of it historically.
Stan once even said "I always felt I belonged to Shields".
Stan Laurel is best known for his partnership with American comic actor Oliver Hardy and Laurel and Hardy became one of the most enduring and popular comedy acts in film history.
The statue of Stan Laurel was put in place near to North Shields Fish Quay  in 1989 in the place where he lived, and was created by sculpture Bob Olley.
Stan Laurel died on the 23rd of February 1965.
Please click on each image for the full size photo. 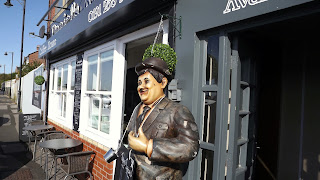 Posted by https://northumbrianimages.blogspot.com/ at Saturday, August 09, 2014 No comments: Links to this post