Swan Hunter Shipyard at Wallsend on the Tyne was for many years one of the most famous shipyards in the UK.
Among the many ships which were built there were the RMS Mauretania which held the Blue Riband for the fastest crossing of the Atlantic for many years, the Carpathia which helped rescue survivors from the Titanic disaster and the aircraft carrier HMS Ark Royal.
The yard went into decline from the 1970's onwards and despite some temporary revivals closed as a shipbuilder in 2006.
Although Swan Hunter no longer builds ships, the company continues as a successful  marine engineering company.
In recent years over £100 million has been invested in modernising the facilities and Swans as it is now known, is developing as a centre for research and manufacturing for the renewables, and oil and gas businesses.
Included in the pictures are the visit to Swans of the Offshore working ship Normand Oceanic on 12/05/2016,  two structures being built and the Newcastle University Neptune National Centre for Subsea and Offshore Engineering.
The A&P Tyne shipyard and a variety of ships undergoing refits there can be seen in the background.
Please click on each image for the full size photo. 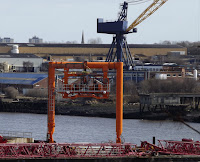 Posted by https://northumbrianimages.blogspot.com/ at Thursday, May 12, 2016 No comments: Links to this post