Tynemouth Railway Station was opened in 1882 as part of North Eastern Railways.
The station became part of the Tyne and Wear Metro system in 1980.
The station had fallen into disrepair but was renovated in 2012 and the refurbished station was officially opened by Anne, the Princes Royal on 02/07/2012.
There is a weekly market held every Saturday and Sunday as well as a monthly farmers market. The station is a grade 2 listed building.
Please click on each image for the full size photo. 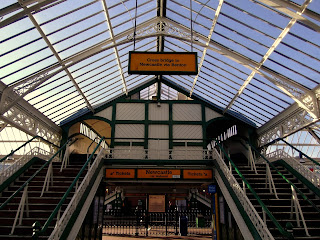 Posted by https://northumbrianimages.blogspot.com/ at Tuesday, January 22, 2019 No comments: