The Tyneside Cinema is the oldest full time newsreel cinema still in full time operation in the United Kingdom. It is now an independent cinema showing a range of films from across the world and is a grade 2 listed building.
The building was designed and built by Dixon Scott who is the great uncle of film directors Sir Ridley Scott and Tony Scott.The cinema was originally opened to show newsreels on the 1st of February 1937 and underwent a major renovation between 2006 and 2008.
The Art Deco style of the building was also heavily influenced by Dixon Scotts' travels in the east. Current patrons include film makers Mike Figgis, Mike Hodges and Neil Tennant of the Pet Shop Boys.
Please click on each image for the full size photo. 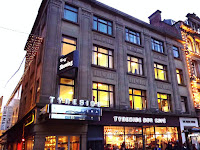 Posted by https://northumbrianimages.blogspot.com/ at Tuesday, October 31, 2017 No comments: Links to this post