Whitby is a seaside town  and a parish of the Borough of Scarborough,North Yorkshire. Prior to the 1960s, it was part of the North Riding of Yorkshire. The town is situated on the east coast of Yorkshire at the mouth of the River Esk. Whitby’s economy is based on maritime industries, minerals and tourisim . Its East Cliff is home to the ruins of Whitby Abbey. The fishing port developed during the Middle Ages, supporting important herring and whaling fleets and was where Captain Cook learned seamanship.
Tourism started in Whitby during the Georgian period and developed further on the arrival of the railway in 1839.The town has connections  with the horror novel Dracula. Jet and alum were mined locally. Whitby Jet, which was mined by the Romans and Victorians, became fashionable during the 19th century.
Please click on each image for the full size photo. 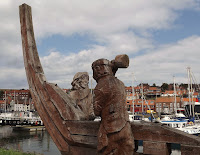 Posted by https://northumbrianimages.blogspot.com/ at Monday, July 13, 2015 No comments: Links to this post