The Yeavering Bell is a twin-peaked hill in Northumberland in the Cheviot Hills. The hill is 361 metres high. There is a wall of a prehistoric hill fort and a tribal centre of the ancient Votadini people. The fort covered an area of around 12 acres and the surrounding wall was around 10 feet (3.0 m) thick. Yeavering takes it's name from Celtic Ad Gefrin meaning hill of the goats.
In the area there are many remains of stone roundhouses and burial barrows.
The first evidence of humans in this area was up to 10,000 years ago.
A settled community of farmers dated to 3500 BC. A development of an ancient henge from 2400 to 1800 BC during the Bronze age suggests this was an important site for ritual and ceremonial activity. The buildings of the hill fort would have been bright pink being made from local andesite.
In 548 AD  the site was a Royal centre for the Anglo-Saxon Kingdom of Bernicia and the later powerful Kingdom of Northumbria which also had a major Royal centre at Bamburgh.
Please click on each image for the full size photo. 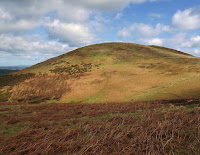 Posted by https://northumbrianimages.blogspot.com/ at Wednesday, April 09, 2014 No comments: